Serialization is rapidly emerging in the pharmaceutical world. To fight counterfeit drugs, more and more governments demand that every single sales product gets a unique code to be fully recognizable and traceable. However, there are still some boxes to check. Many pharma companies, contract manufacturers and packagers need to get a serialization and track & trace solution up and running. QbD is getting ready for this crucial challenge.

The idea behind serialization is to apply a unique code on genuine products. Additionally, traceability ensures that all steps in the supply chain can be back-traced: from pharmacy to production. The extent to which this is done, varies per country. Getting an international standard for serialization is one of the major challenges, as this has implications for the organization of packaging lines.

Within the EU, member states that don’t have serialization standards yet, should implement them as of February 2019. However, some countries – such as Belgium and Italy – already had a kind of ‘pre-serialization’ system in place. That’s why these countries can launch serialization later. The FMD (Falsified Medicine Directive) requires serialization with a GS1 standard serial number issued by the manufacturer. Product identifiers may include a GTIN or country-specific product code, and additional country-specific data elements may be required.

The current international differences have some practical implications. The same packaging line often produces packages for various countries, which all have their own demands in terms of serialization, so they need to be easily adaptable to various markets. This implies that different printing and verification processes should be possible. For instance, if Brazil would want to add a national registration number, this fifth element would increase the size of the data-matrix code. It could be a challenge to print the increased overprint on a small package. This would lead to the installation of an extra printer and camera for another side of the box.

In the meantime, QbD has helped to build and launch packaging lines at various clients. Serialization compliance is increasingly becoming a crucial part of such projects. As a result, QbD’s expertise in serialization grows alongside this evolution. As there are many sides to serialization, QbD consultants usually team up with other specialists for specific legal or technical aspects.

When you look at the whole chain, QbD’s strength lies in the first stages – the secondary packaging at the manufacturing site. Technically put: QbD is mainly specialized in level 1, 2 & 3 systems. QbD can help you create user requirements for hardware and software on these levels: printing and verification solutions integrated in the packaging line, as well as serialization line management software and site management software.

For level 4 & 5 systems, QbD engages in strategic partnerships with companies who have specific expertise in those fields. Through these collaborations and its own experiences, QbD’s expertise in serialization is expanding rapidly. Moreover, QbD consultants get to work at different companies, which enables them to get a 360° overview of best practices. This way, they can advise clients on how to handle their suppliers and help them to get a stronger negotiation position.

With legislation evolving quickly around the globe, the last word on serialization has not been spoken. QbD will keep a close eye on the latest evolutions. Don’t hesitate to contact us for advice, trainings, packaging and artwork issues, technical challenges or more. 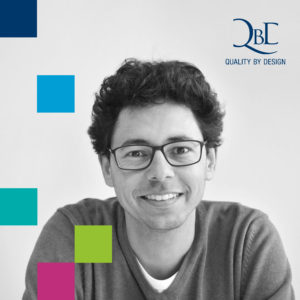 QbD consultant Vic Ampen has been working on packaging lines at various leading pharma clients. He has already been involved in serialization projects, together with other specialized partners.